After months of waiting, we now had 3 days including travel, to meet for the first time, our new children. In Sharon’s case literally the children of her dreams as she has shared previously regarding the vision the Lord had given her. So we had the balance of December 5th, all day December 6th and 7th and then we would board an overnight train from Kyiv to Odessa at 2020 on the evening of December 7th.

We spent the balance of Monday and Tuesday exploring Kyiv – strolling the streets that we had visited the previous Friday on our tour of Ancient Kyiv. 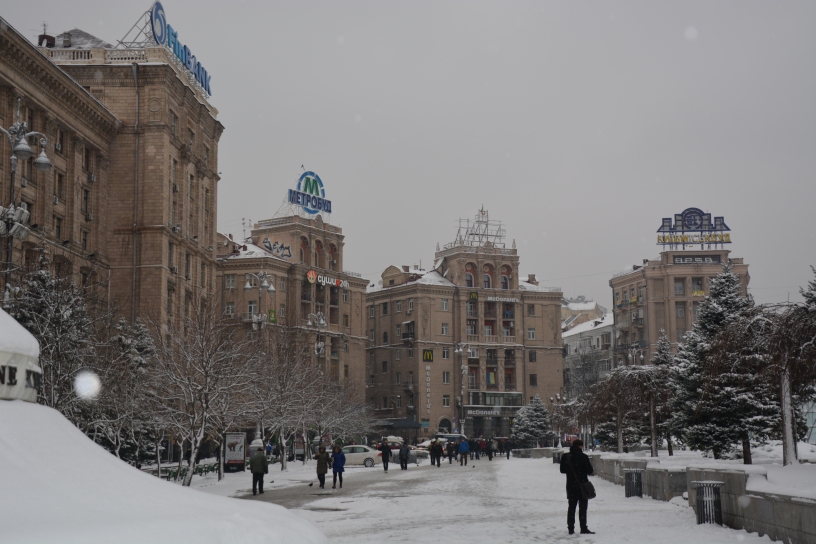 Hoping to alleviate some of the anxiety that I was experiencing anticipating our impending trip to Odessa, I attempted to try the preoccupation of being a tourist to distract me! It did provide moments of relief.  It is somewhat peculiar how uncertainty tends to produce fear in our hearts. My mind was flooded questions about the upcoming train trip. We had already been warned by our facilitator regarding the high risk for theft at the train station and on the trains. So needless to say safety was becoming a bit of a worry. Philippians 4:6 was constant reminder of how to deal with such thoughts and concerns and believe me, pray we did. Peter reminds me in 1 Peter  5:7 of the need to cast all of my anxiety on Him . . . but I was having a difficult time casting my cares, as such requires letting go, and I was wrestling with letting go! 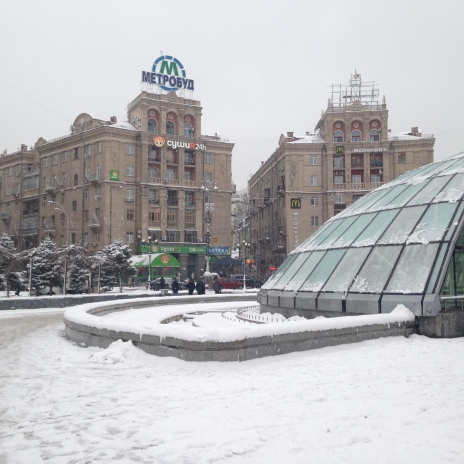 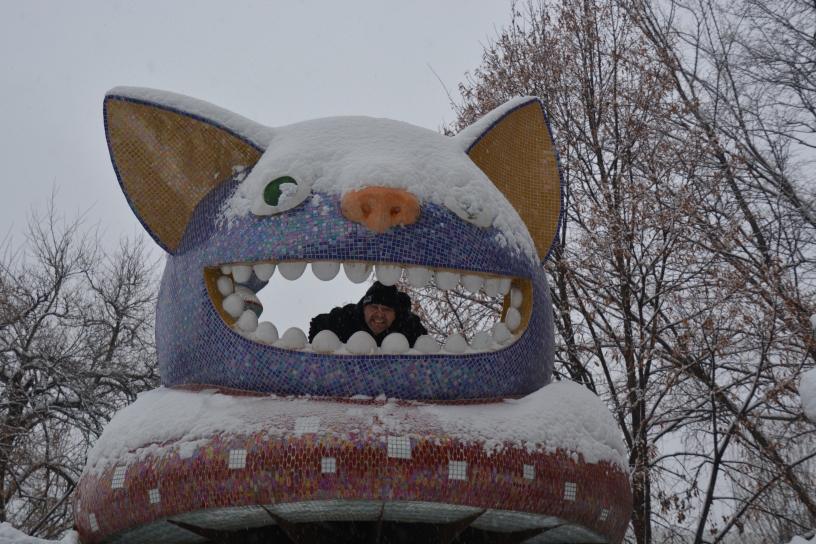 One of the entrances to the Metrograd, Kyiv’s underground shopping mall.        Independence Square. Rob inside one of the many sculptures in Kyiv.

What would the new town and community be like? What would the orphanage be like? And what would the children think when they would meet us, as we are no longer young people, and have grandchildren ourselves – even though we would both say we are young at heart. How would everything proceed, . . . as I was committed to a new position with a start date of January 13th 2017. I had timelines mapped out in my mind as to when each of the major events would have to be completed if I was to make that established start date. Would the Christmas season in the Ukraine cause processing delays with office closures for the holidays as it would if we were still in Canada? 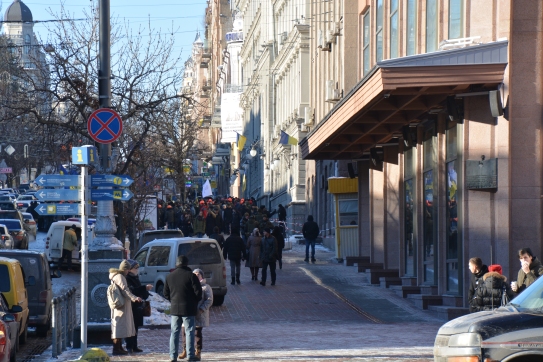 Each thought was granted a momentary and repeated hearing in the council of my mind until it would be brushed aside by either another concern, the bite of the cold December air, or our conversation as we strolled about. Temperatures had fallen considerably from the previous week when we had seen significant amounts of snow much of which had melted over the weekend prior to temperatures falling.

When we needed a reprieve from the cold we would step into a shop or stroll through the Metrograd, the underground shopping mall of Shevchenko and Khreschatyk. Though our days in the Ukraine were only very brief at this point, there was a sense of loneliness that I had never experienced before.  Looking back it was likely a combination of not being able to communicate with virtually anyone and being situated in a totally unfamiliar location. Few signs were legible. I couldn’t read the Cyrillic alphabet and I remember texting our Pastor and saying that I was beginning to get a sense of the culture shock that missionaries might feel. I even got a new appreciation for the loneliness Sharon must have felt when she first arrived in Canada from Ireland not knowing anyone – with people, stores and products completely unfamiliar. 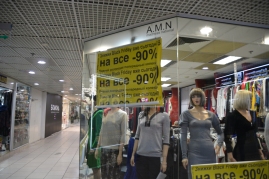 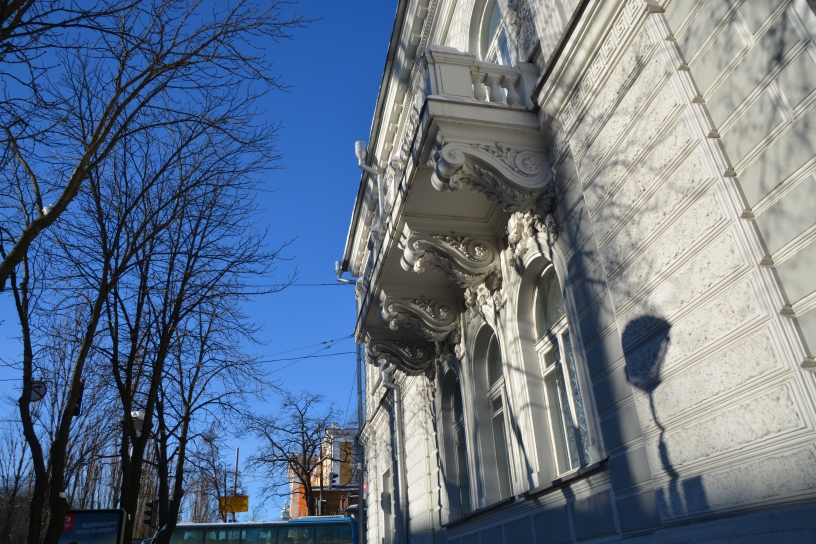 But there was an upside to this day and the days to follow, and Sharon and I made the most it, walking and talking. Though I probably would not pick Kyiv as a honeymoon destination, the hours we spent (and would spend) walking and talking was good for us as a couple.  We shared our fears and worries with each other and prayed with each other, and for each other more than we had ever before and honestly have been able to since. We could be together – just together with really no distractions. We had no opposite shifts to contend with for now – and it was good, really good! 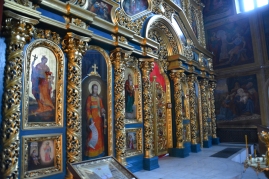 Finally 6:00 pm December 7th arrived. Our bags were ready and the door bell rang. Inna  arrived with our driver to take us to the train where we would catch up with Yana who would be accompanying us to Odessa. Excitement was mounting as what had actually become very familiar in a few short days was being abandoned for . . . we had no idea what!

At the train station we were handed our tickets and advised to keep them and our luggage secure . . . you guessed it: because of a high prevalence of theft. There was no time or need to sit as we were quite promptly boarding and directed to our cabins. We were shown how to secure our cabin while we slept from the inside because . . . you guessed it the high risk for theft! Oh my!! How many more reminders did we need?

Our Train Cabin from Kyiv to Odessa. We slept well and felt very safe

We made the most of this new experience visiting until we were too exhausted. I slept remarkably well, waking a couple of times as the trained slowed and stopped upon entry into other urban areas. It seemed like no time at all and Yana was knocking on our cabin door instructing us to get ready to depart the train as it was approaching the Odessa station. It was still dark in the early morning and we still had about an 1.5 hour car ride yet to reach our destination. We traveled south and west from Odessa following the coast of the Black Sea. The ride was quiet as we experienced Ukrainian rural roads (that made me promise to never complain about Manitoba roads ever again!) and a December sunrise, catching glimpses of our new landscape. 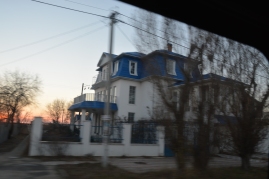 Having arrived at Bilhorod-Dnistrovskyi, our driver and facilitator searched for accommodation, which appeared from what we could gather was proving to be a bit of a challenge. What she felt was adequate for our North American taste was either full or undergoing renovation, or not secure enough, or too far from the Orphanage. She really had no idea how easily satisfied we could be, but I did appreciate the fact that she certainly had our comfort and safety at heart.

She finally settled on the Fiesta Hotel with the understanding that we would get 3 nights in one room and then be moved to another room for the remainder of our stay. I never questioned or complained but was always puzzled why, because we spent 7 and a half weeks sleeping in small twin beds with bed covers that would always slide off in the middle of the night. We look back and chuckle now. The hotel had a small but very fine restaurant on the main floor which we were encouraged to use and strongly discouraged from walking about after dark.

The view from our bedroom window at the Fiesta Hotel. Rob coming down for a walk.

We obeyed this rule for about a week and then we began to explore and find places to eat throughout the town that were cheaper and equally as good. One in particular  soothed our taste buds when our longing for familiar foods became unbearable. Were we careless or were we exercising faith . . . I will let you be the judge as we share about life in Bilhorod-Dnistrovskyi for the next 7 and half weeks in later posts.

We had a few hours to get settled and freshen up, before our driver and Yana would take us to the Office of Children’s Services where we would be asked even more questions and if all went well there, we would then be escorted to the orphanage to meet the children.

The Director at the Office of Children’s Services who met with us, had a very warm and motherly presence.  I would guess she was probably 45-50, and dressed in a full length black fur coat and hat to accompany us in the taxi to the orphanage. She didn’t speak a word of English, but she smiled, laughed and talked continuously to us through Yana. Sharon impressed her with a few phrases in Russian (Sharon’s style – she has an amazing gift of being able to pick up language) and by showing her the Shutterfly book of pictures of our Canadian home and family. The Director of Children’s Services even told Sharon, that Sharon reminded her of one of her favorite Russian actresses as she looked so like her! We googled the actress later when we had wi-fi and there was a striking resemblance in years gone by, but that resemblance has currently diminished as her Russian look alike has a couple of decades on Sharon.

Finally it was time to go and meet our children! Sharon will tell you what happened next…

If you would like to help with Adoption Volume 2, to provide a forever family for some Ukrainian Orphans, click on the preceding link.